The Thermonuclear Smoke Devil is a level 301 slayer boss. It has 240 hitpoints and requires level 93 slayer to kill it. Despite its high level and requirements the Thermonuclear Smoke Devil is a fairly easy boss to kill even at a low level, provided you have Protect from Melee. Even without protection prayers it's maximum hit is around 12. You can access this boss by teleporting to its lair to the boss teleports menu.

The thermonuclear smoke devil has quite a large drop table with some various items on it. The most notable drops are:

The following stats are required to kill the Thermonuclear Smoke Devil:

The following stats are adviced to kill the Thermonuclear Smoke Devil:

The following gear setups are adviced to use: 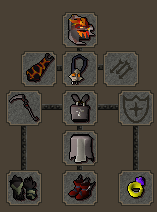 Notes
- Remember to always wear a Ring of Wealth (i) for an increased drop rate!
- The minimum gear set is a reccomendation; this boss is defeatable with a lower setup such as rune/dragon and a dragon weapon.
- The best gear to kill this boss may vary. You can easily switch a Scythe for a Ghrazi Rapier, a stronger version of the Abyssal Whip or a Vesta Longsword. Infernal cape can be switched by a max cape, ferocious gloves with Barrows Gloves and Bandos (i) can be switched with regular bandos or Vesta/statius equipment (all tiers). 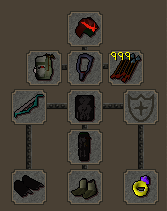 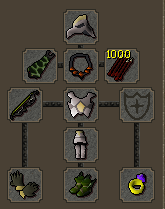 Notes
- Remember to always wear a Ring of Wealth (i) for an increased drop rate!
- The minimum gear set is a reccomendation, this boss is defeatable with lower tiers of dragonhide. Also, a Rune Crossbow may be used instead of a Magic Shortbow.
The best ranged gear to kill this boss may vary aswell. A Twisted Bow can be switched with a Toxic Blowpipe, an Armadyl Crossbow or a Dragon Crossbow. Armadyl (i) gear can be replaced with regular Armadyl or any tier of Morrigans. Pegasians may be switched with Ranger Boots and Enraged cape with Ava's Assembler. 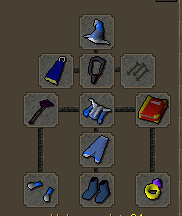 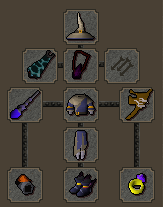 Notes
- Remember to always wear a Ring of Wealth (i) for an increased drop rate!- The minimum gear set is a reccomendation, this boss is defeatable with, enchanted robes, elder chaos robes and elemental staves.
- The best magic gear may vary, Ancestral may be replaced with Ahrims, infinity robes or any tier of Zuriel's Robes. Kodai Wand may be replaced with Sotd/Sol, Zuriels Staff, Trident of the Seas or Sanguinesti staff, Arcane Spirit Shield with Mage's Book, Tome of Fire (when using fire spells) or Malediction Ward. Ensouled cape may be replaced with an imbued god cape or max cape and tormented bracelet with Barrows Gloves
- The best spells to use for this boss are blood/ice barrage or Fire Surge/Fire wave. Make sure to bring a Tome of Fire for the last one if you have it!