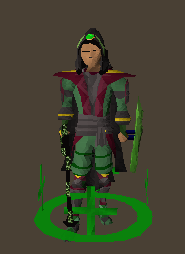 Writers note: In the time when a lot of new content is pushed into the game, it may occur that some new items are not yet described in this guide. Feel free to let staff know about this in-game or through discord so we can add them this to the guide.

Fatal Blade is a full custom one-handed longsword. It is one the most strongest 1 handed weapons in-game. It has a special attack where it launches 4 very fast small hits, followed up by a very high accurate hit. Fatal Blade can be made by combining 3 fatal shards. They are dropped by the ancient barbarian bosses, which are accessible after the Ancient Barbarians quest. Both Fatal Blade and the shards are tradeable. 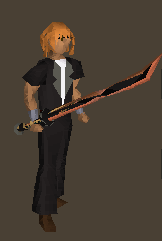 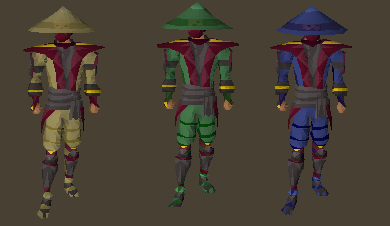 Ensouled and Enraged cape are capes based on the Infernal cape. They provide the best offensive bonus in respectively magic and ranged. They are currently only obtainable as a random reward through extreme donator chests, which can be bought from the credits shop or are rewarded when you buy something from the store at www.runerealm.org/store/
In a later update they will be obtainable through the Inferno minigame. You can upgrade them to Ensouled/Enraged max cape at the Sponsor Zone or at the Prestiger Guild. 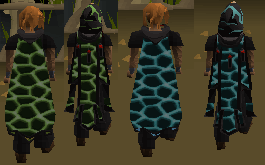 While this PvP armor is available on OSRS they function quite different on RuneRealm. First of all they don't degrade. The weapons are the closest to their OSRS counterparts. The armour pieces however are quite different. Each armor set consists of the base set and 5 tiers. Every three pieces you get you can upgrade a higher tier. For example, three basic Vesta's platebodies are upgradeable to one Vesta Chainbody (T1), three Zuriel's Robetop (T3) are upgradeable to one Zuriel's Robetop (T4). The armour bonuses are tweaked as well. The basic variants require level 60 defence and is slightly weaker than their OSRS counterpart. Every tier upgrade has a higher level requirement to wear. Tier 5 armor pieces currently provide the best stats in game and are highly sought after. These armor pieces are dropped by Crystal Aviansies, Crystal Demons and Crystal Dragons. They can be found in the Revenant Caves in the wilderness or at the Super-Donator Zone. The pieces are also awarded by PvP crates, which can be bought through different point/currency stores on RuneRealm. You can also buy a PvP crates pack in the online store at https://runerealm.org/store/ Perhaps unnecessary to mention: The PvP weapons are not upgradeable. All of the PvP armor pieces and weapons are tradeable.
The following amount of pieces are required to upgrade.
Tier 1 (3X Basic/T0)
Tier 2 (3X T1, 9X Basic/T0)
Tier 3 (3X T2, 27X Basic/T0)
Tier 4 (3X T3, 81X Basic/T0)
Tier 5 (3X T4, 243X Basic/T0)

Needless to say, getting a full T5 set is arguably one of the longest grinds in-game. 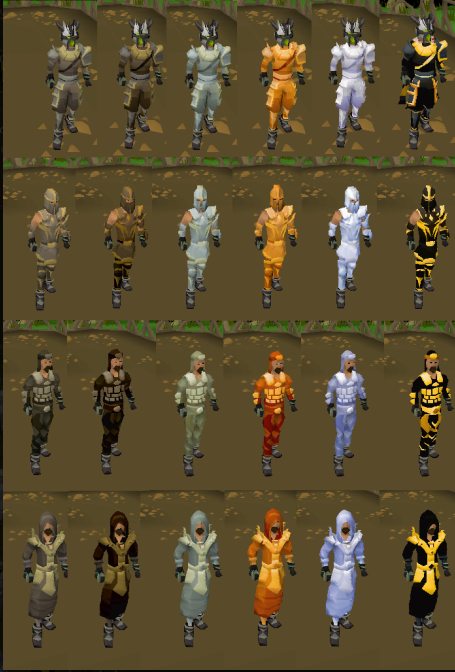 Writer's note: In the top row you'll see our model wearing a Twisted Slayer Helmet. This is not a part of the PvP armor set.

Whenever you buy things from the webshop you can get a (new) donator rank. It starts at Donator, and goes up to Sponsor. At every rank you are awarded a new aura, which has certain Perks. Every new Aura has the perks from the previous aura, plus something new. Make sure to check out all Donator Auras and other donator perks at https://runerealm.org/store/

Lucky Ring is a ring that has a small chance to double the loot you get. You will get a notification when this happens. It can double any loot, even very rare items. Lucky Ring automatically adds coins to your money pouch. You can obtain a Lucky Ring by creating one with a Lucky Gem and a Perfect gold bar. Lucky gems are dropped by superior slayer monsters. The Lucky Gem and Lucky Ring is not tradeable. The lucky ring can be Imbued to a Lucky Ring (I) with a Lucky Ring imbue scroll. This imbue will give it the same features the Ring of Wealth (I) has, such as a 5% DR reduction. You can obtain this scroll by completing the Corporeal Beast collection log.

Ring of Wealth (I)

The Frozen and Volcanic Abyssal Whip are also obtainable in RuneRealm however, they provide a slight stat boost compared to the regular Abyssal Whip. There is also Tentacle Whip, which does not degrade, contrary to OSRS's form. We also have the Serpentine, Lucified and Divine Whip. These are obtainable by combining an Abyssal whip with it's respective Whip mix, they are even stronger than the Volcanic and Frozen whip and used to be the best one handed weapon in-game. These Whip Mix is currently only available as a rare drop from the Event Chest, or the Extreme, and epic Donator chest. At last there is the Ominous Whip. The Ominous Whip is one of the strongest one-handed weapons in-game. It can be created by combing a Serpentine, Divine and Lucified Whip. 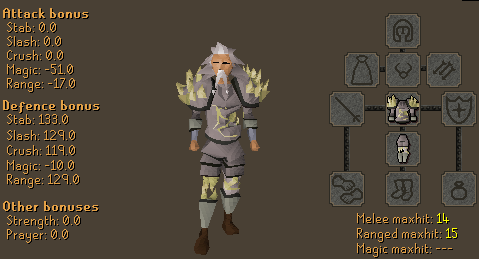 The divine spirit shield is a shield which can be created with a Blessed Spirit Shield and a Diving Sigil, both dropped by the Corporeal Beast. The Divine Spirit Shield reduces incoming damage and a small portion of your prayer points will be drained instead. The shield and Sigil are tradeable.

V's Shield is obtained by killing Ferocious Basilisk, a custom monster based on OSRS's Monstrous Basilisk. While it does not have the Mirror Shield effects like it has in OSRS, it does protect you against venom and it reduces the Ferocious Basilisk special attack damage. V's shield is tradeable. 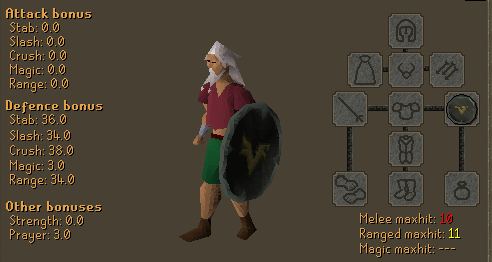 The mirror shield is not a custom shield but it will reduce damage done by the Ferocious basilisk by about 25%. It is a weaker version from V's shield that will not protect you against venom, but will certainly help you on the grind killing Ferocious basilisk. It can be bought in the Slayer points store. 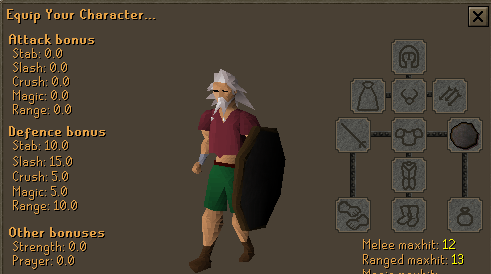 Contrary to OSRS, The nightmare staff, it's orbs and Inquisitor armor are a unique drop from the Theatre of Blood instead of the Nightmare of Ashihama, as this boss has not released yet on RuneRealm, nor has an estimated time of release. Blood shard, which is used to create the Amulet of blood fury also drops as a unique from Theatre of Blood, as the vampyre area around the Theatre of Blood is not open for players.

Side note: The Scythe of Vitur will always hit a target three times regardless of it's size, and does not hit multiple targets at the same time as on OSRS. This makes it arguably the strongest melee weapon in-game.

This item is obtainable through various points shop on RuneRealm. As the name says, it doubles the damage you do for 30 minutes, having 2 doses, every dose gives you 15 minutes of double damage. While this is active, your combat xp gained is also doubled. The Double damage potion does not work in the wilderness, duel arena and in the Inferno minigame. This item is tradeable.

This item is also obtainable through various points shop on RuneRealm. It provides the user with 30 minutes of double XP. This item stacks with the Well of Goodwill (a well at home which accepts items, coins or pets for double xp for the whole server) as well as with the Double damage pot. This item is tradeable.

This drink is buyable in the vote points shop. It will restore your special attack bar back to 100%. This item is tradeable.

The clue box is not used for storing clue scrolls as it is on OSRS, but awards you with a random difficulty clue scroll. You can buy this through various points shops. This item is tradeable.

This item does not vary much from OSRS, except you can let it store more cannonballs at certain donator ranks or through a custom locked ability (See the starters guide on this wiki for more information on abilities). The Dwarven Cannon, the pieces nor a full set, are not tradeable. It is available through certain points shops.

The looting bag does not vary much from OSRS, except for the fact it is usable outside of the wilderness. It can be bought through certain points shops.

There are certain skilling caskets available at the skill points shop at home. Each Skilling casket has a chance to give you items which are used in that skill, or has a chance to give you a skilling outfit piece. Each outfit contains of 4 to 6 pieces, depending on the skill. Each piece gives you a percentage boost when equipped while performing that skill, while getting a small extra boost when wearing a full set. There are caskets (and skilling outfits) available for farming, firemaking, fishing, herblore, mining, runecrafting, smithing, thieving, woodcutting. They are not tradeable.
Side note: At every agility course you will find Grace, who sells you graceful outfit pieces in exchange for Marks of Graceful, which can be obtained as a drop while performing at these agility courses.

In contrary to OSRS, you can also upgrade your third age axe and pickaxe with a smouldering stone, making it infernal. An infernal Axe/Pickaxe will respectively burn logs or smelt ores into bars occasionally. Extra coal in your inventory is not required, nor a tinderbox for burning logs is. These two tools are the best axe and pickaxe in-game. These items are tradeable.

These two items are obtainable in the skill points shop. The bottomless compost bucket provides you with an endless supply of compost, while Gricoller's can allows you to water your seeds indefinetly. These items are not tradeable.

If you feel like any item is missing on this list and should be added, feel free to let staff know in-game or through discord so we can add them to the guide!