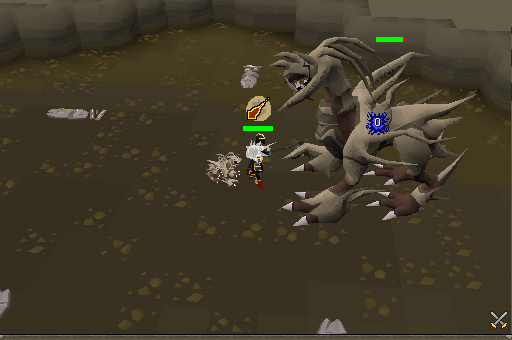 There are certain ways in Runerealm to get a boost to your drop rate. In this guide I will give a small explanation about drop rates and how you can boost your drop rate.

Most npc's drop 2 items every time you kill them, one which is bones, and an item on any of the drop table other than always. 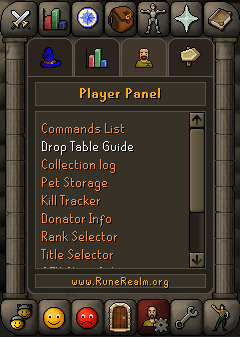 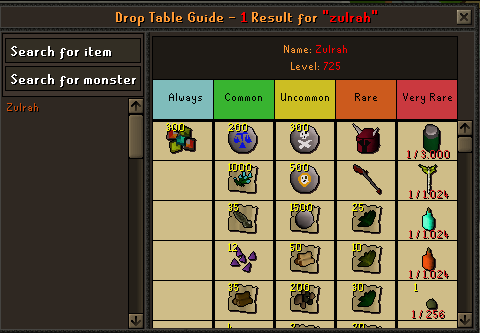 Every item has a certain numeral rate to drop. For example, chicken have a 1/1,  or 100% chance to drop bones, and a 3/4, or 75% chance to drop feathers. This however does not mean it is guaranteed. For example, a 1 in 10 drop rate does not mean you will always get that item after, or within 10 kills. See it as throwing a dice with 10 numbers, there's a 1 in 10 chance you will hit the number 10, but that doesn't mean you will always hit it when you throw the dice 10 times.

The following will increase your drop rate and stack with each other:

When you make a fresh character you can choose what type of account you want, Normal, Ironman, Hardcore Ironman or Ultimate Ironman. You can also choose for an Extreme, Extreme Ironman, Extreme Hardcore Ironman or Extreme Ultimate Ironman. Picking any of the Extreme variants will boost your drop rate with 20%  at the sacrifice of 40x xp rates (Normal accounts have 50x the OSRS xp rates, Extreme accounts 10 times). This will always be active. 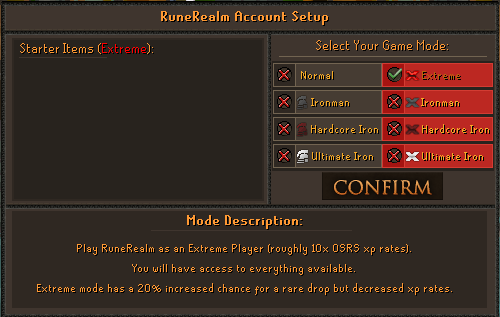 Side note: You can obtain a Lucky Ring by creating one with a 'Perfect' Gold bar and a Lucky gem. You can imbue this ring with a Lucky Ring imbue scroll, obtained as a reward from the Corporeal Beast collection log, which will give you the same 5% DR Reduction as the Ring of Wealth (I).

If you’ve obtained a Genie pet you get your  drop rate boosted by 5%. You can obtain this pet by buying it from the boss points store or the Runerealm credits store (Donator Guide at ::Home) this will only be active if you have the pet effect on. You can have different pets following you and other pet effects on. For example, you can have a pet Zulrah follow you, while having the Genie pet effect on. To make sure this pet effect is on, go to player management settings, player panel and click on pet effects. As Master Alex is a combination of Mini Alex, Genie pet and Skiller pet, it will work the same as genie pet. Extreme donators can have 2 pet effects on at the same time, elite sponsors 3. You can’t however have Genie pet effect and Master Alex effect on at the same time. 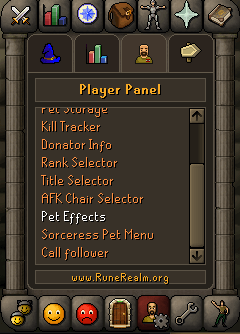 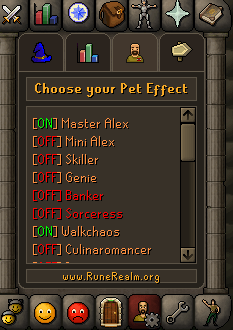 You get an extra 5% boost to your drop rate if you have unlocked the Lucky Luke ability. You can unlock this ability at Patchy, he is on the southwest side of home. Unlocking abilities require you to prestige skills. You can prestige a skill when you’ve reached level 99. Talk to Patchy or right click him and select prestige. Prestiging a skill will set your level back to 1 and XP to zero, but will give you a monetary reward and a prestige point. Extreme account receive 3 points for prestiging a skill. You can prestige a skill up to 10 times, making the maximum amount of points for regular accounts 220 and for extreme accounts 660. To unlock an ability, talk to Patchy or right click him and select abilities. There are 3 categories and each category has 4 abilities. Going from bottom till top, you have to unlock the previous ability first to unlock the one above. So to unlock Lucky Luke, you have to unlock Cannoneer and Amulet of Aggression first. The first ability requires 3 points, the second one 5 points and the third one 15 points, so to unlock Lucky Luke, you will need a total of 23 points. Once you’ve unlocked this ability, the effect will always be active. 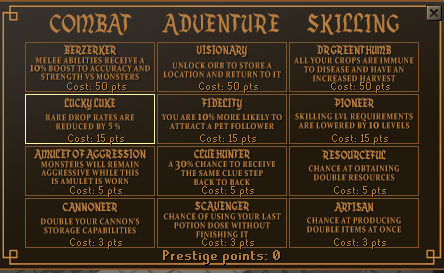 You can buy credits and other items in the Runerealm store for real money. You’ll unlock ranks when you’ve spend a certain amount of money. Each rank gives your drop rate a boost. Go to www.runerealm.org/store for more information about donation benefits and prices. The following ranks are achievable with their respective drop rate boost:

Pet Walkchaos: +5% in wilderness only

The Walkchaos pet can be obtained as a drop from the Walking Chaos boss. Having this pet effect on will boost your drop rate in the wilderness by an extra 5%. If you are an Extreme Donator or higher you can have both Genie/Master Alex and Walkchaos pet effect on at the same time.

Every 30 minutes, a game-wide event will happen. One of these event is a drop rate boost event. Everyone's drop rates will be boosted on all bosses and minigames, increasing your chance of a rare drop by 5%!

Having everything stated above with the highest donator rank can result in the following drop rate increases:

Total Extreme accounts: 75% or 80% with a drop rat event on (80% in wilderness with Walkchaos pet or 85% if there is also a drop rate event live)


The way a drop is calculated in raids is different than monsters in the open world because you get points for your actions. I advice you to read one of our raids guides to find out how drops are calculated and how your drop rate boost can effect this:
https://wiki.runerealm.org/books/raids-guides

Superiour slayer monsters have a base drop rate, shown when examined or looked up in the monster drop table guide in-game. They have a certain chance to spawn on a slayer task when killing their regular variant. Superiour slayer monsters can also be found in a cave below the Sponsor-Zone, only accessible for Super Sponsors and Elite Sponsors. The drop rates in these caves have been multiplied by the chance you would have one spawn on a slayer task outside of the cave. This makes the droprate somewhat similar to what it is to be killed outside the cave. 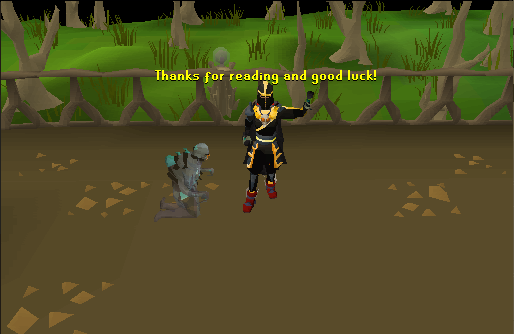